Create an Account - Increase your productivity, customize your experience, and engage in information you care about.

John Baker is the Assistant City Manager at the City of Garland.  He has been at the City more than 30 years and offers leadership in several administrative areas including all areas of Public Works design, construction, project management, and regulatory affairs.

John earned his Bachelor of Science in Civil Engineering from the University of Missouri at Rolla in 1983.

He began his career in the Engineering Department at the City of Garland in 1984 as a Graduate Engineer. 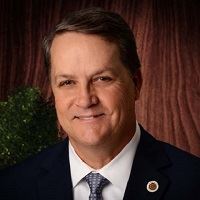 After receiving his license as a professional engineer in 1988, he progressed in areas of responsibility and was named Director of Engineering in 1997.  He was named Managing Director of Water/Wastewater in 2009, then appointed as Assistant City Manager in 2015.

John is married to Leanne Baker and they have three children, John, Taylor, and Nicole. John is active in several professional organizations.